The Very Merry Christmas Movie Bracket wraps up this week (scroll down for the voting schedule!) and it’s been a wild ride, my friends. We’ve been through a lot together. 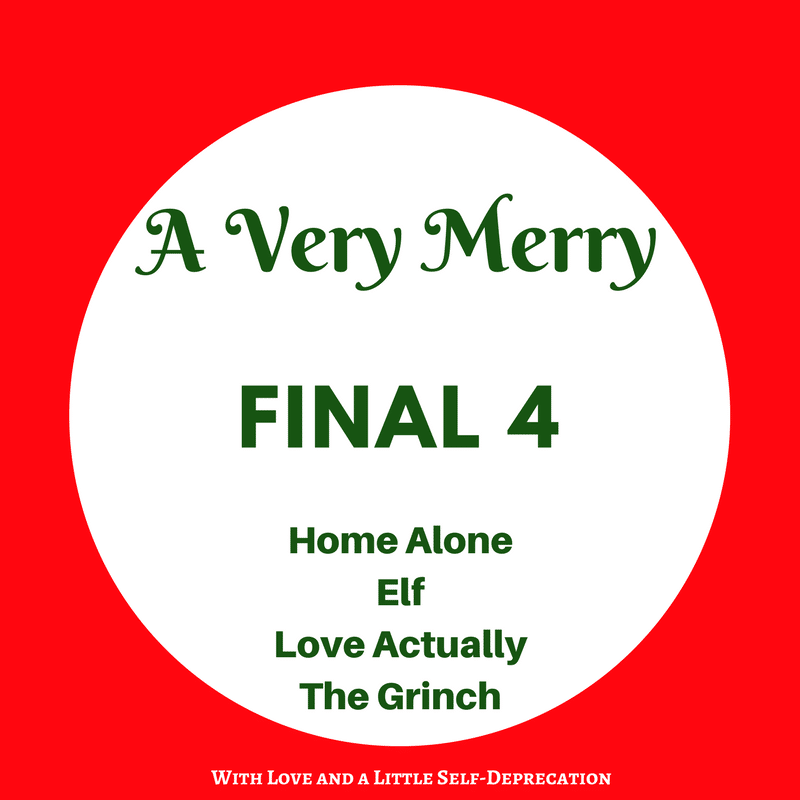 And now we have our Final 4. A really strong Final 4. Let’s see how they got there.

It’s no secret that Home Alone is my personal winner. So I’ve gotten a little flack for what appeared to be a cake walk into the Final 4. This assumes that I put A LOT more thought into the building of this bracket than I did. But to be fair it was probably subconscious.

The McCallisters took out The Holiday in Round 1, which is actually a really lovely movie. But while lovely is nice for your great aunt’s cross stitched pillow, it’s not winning brackets.

In the Sweet 16, Kevin took on Reese and Vince in Four Christmases. A movie that critics (me) have called “fine.” Would I watch it if it came on TBS tonight? Of course. No question. Does it beat Marv and Harry? Not a chance.

The first real challenge Home Alone faced was Muppet Christmas Carol. This one hurt a little. I could watch the “It Feels Like Christmas” scene every day of my life and it wouldn’t be enough. Muppets BELONG in a Christmas Carol. But still, it was against Home Alone. And truth be told, the votes weren’t even close.
[youtube https://www.youtube.com/watch?v=WlRpGj7LWS4]

Will Ferrell has been an unstoppable force in this bracket. I think it’s because he has a serious height advantage on his competition, even Queen Latifah. So the first round match up against Last Holiday, a movie that was only even marginally about Christmas, was basically a layup.

One of the biggest regrets of my life is setting up the bracket so that Home Alone 2 would have to potentially face Elf in the Sweet 16. That was just plain dumb. Kevin 2.0 could have gone much further in the bracket if not for the vocal stylings of Zooey Deschanel. Still, how the lady in the park with the turtle doves didn’t get more votes is beyond me.

Then in the Elite 8 it was Elf vs. Rudolph. Things got real in this match up. Eric reminded us all that the entire plot line of Rudolph is “you better be the same as everyone else otherwise the only way they will like you is if you are critically important to their well being.” Traditionalists replied with “But it’s Rudolph…” At the end of the day, Elf took it home.

How the Grinch Stole Christmas

Maybe Christmas, perhaps, means a little bit more. The Grinch made us feel all the feels and rode his dog sled into the Final 4 with relative ease. First round he even took down the Terminator. Jingle All the Way, another one I’d probably say “sure, let’s leave it on TV” when flipping through the channels. But nothing I’m actively seeking out.

Then in the Sweet 16, that old Grinchy Clause took down a movie that gets an entire day long special on TV every, single, year. That’s impressive. A Christmas Story is a true classic, I triple dog dare you to find someone who doesn’t like even a small part of this movie. But alas, Cindy Lou Who has a lot of Facebook friends.

One of my favorite moments of the bracket came in the Elite 8 when Bevin commented that the first two rounds of voting had desensitized her and she now had no problem picking Grinch over It’s a Wonderful Life. A secondary goal of this bracket was to toughen people up in this season of love. The Grinch’s heart can grow three sizes, but all of us outside of Whoville need the mental toughness to make the hard choices. Goal achieved.

Perhaps the most controversial of our Final 4. But really not until we got into the Elite 8. So let’s start from the beginning, that’s a very good place to start. First up for Alan Rickman and company was Danny DeVito in Deck the Halls… Do we really need any more information here? No. Moving on.

In the Sweet 16, Colin and Hugh matched up against what I think is actually a pretty good sequel, and what Bill thinks is the worst garbage ever released on DVD. Agree to disagree. Santa Clause 2: The Mrs. Clause (come on, that’s clever!) was taken out, and rightfully so probably. Have you heard young Meghan Markle sing “All I Want for Christmas is You”? Chills.

I’m scared to even write about the Elite 8 match up. Love Actually vs. Charlie Brown Christmas. YIKES. This one had me in a cold sweat for 24 hours because 1) after I voted I couldn’t change my mind and I wasn’t even sure if I wanted to, 2) Ryan said that Christmas would be cancelled in his house if Charlie lost, and 3) I had absolutely no mechanism planned in the case of a tie. And this one was tied at 6pm ET, with the highest number of votes of any of our match ups from any round. A few Love Actually fans showed up at the last minute, just in cases, and propelled Emma Thompson into the Final 4. Love actually was all around. But let’s not forget what Christmas is all about.(BRB, sobbing.)

The Finals:
Winner A vs. Winner B – Wednesday 7pm – Thursday 7pm

Make sure you’ve liked and followed With Love and a Little Self-Deprecation on Facebook so that you’ll see the polls and can place your votes. I’m excited, I’m nervous, I’m thrilled that this bracket has brought people together in, and I quote, a “joyous rage.” What more could I have asked for?

With popcorn in the microwave ready to go,

Haven’t seen one or more of the Final 4 yet this holiday season? Check them out on Amazon (affiliate links)