not being nominated for Best Picture is an outright crime. It is my new favorite movie and I’m rallying the troops to its defense.

I know what you are thinking, whose favorite movie is a sequel? But to that point I’ll direct you to some excellent work done in Home Alone 2: Lost In New York

If what you were really thinking is, “Oh Becca… you need to get out more. You realize they make movies for adults right? And that you are one?” Fine. But I see your Shape of Water, Lady Bird, and Call Me By Your Name and raise you an Peruivan expat bear in London who can teach the world a thing or two about kindness.

We took Jack to the movie theater for the first time for his 3rd birthday. He had seen the first Paddington movie on our couch and thought it was hilarious, and the attempted taxidermy went right over his head, so we thought Paddington 2 seemed like a good choice. The other option was Peter Rabbit but I read a review that said Peter kills a guy in that movie… I probably read that wrong.

Promise, no spoilers, but in order to explain to you why I loved this movie here’s a quick Paddington 2

review. Paddington wants to give a present to his Aunt Lucy so he gets a job to buy her a special pop up book about London since she’s never been able to visit. But Hugh Grant steals the book because according to a family legend it contains clues to a treasure, and in general Hugh Grant just isn’t to be trusted. Paddington gets collared for the crime instead and thrown in jail, where he actually does incredibly well for himself because he has a cheery disposition and can see the best in people. Meanwhile his human family, the Browns, are actively seeking out the real criminal to clear Paddington’s name.

Hold the phone, Bec… you brought your 3 year old to a movie in which the lovable main character gets thrown in prison…? Shhhh… it’s fine.

A lot more stuff happens, but I promised myself a long time ago that I would never be the Reality Steve of children’s movies. Just know that Paddington’s genuine kindness to his family, neighbors, and fellow inmates really comes back in spades. He saw the very best in every single person/animal he interacted with and treated them with respect and love. There were some close calls; he bearly made it. Yet there was no bear left behind. And there were lots of bear hugs. Just a crazy amount of sweetness. (There’s a marmalade joke in there I think.) 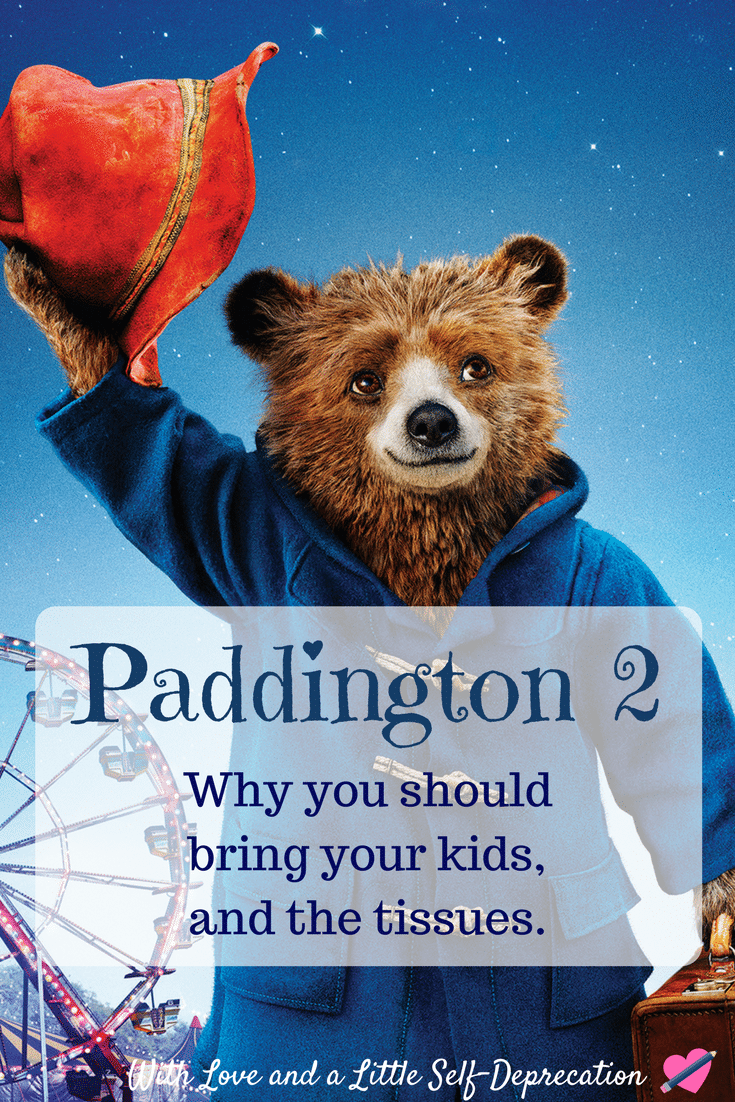 Corey over at The Nostalgia Diaries recently wrote a piece about taking her daughter to see The Greatest Showman. At the end of the movie she asked her six her old daughter what the movie was about. Her answer is lovely, go check it out. So that prompted me to ask Jack what Paddington 2

was about when we got in the car later. He responded by saying “Huh? What what was about?” And then he chugged some chocolate milk.

But that was fine. He didn’t need to tell me what it was about. He knew.

At the end of the movie, a boy a bit older than Jack starting jumping up and down and doing somersaults in the aisles. Jack thought that was just awesome so he started to join in. Kid hero worship at its finest.

The little boy Jack found so fascinating and wonderful was a 6 year old with a sweet smile and a lot of energy. He was also developmentally delayed and had few words to communicate his movie theater excitement. Jack didn’t see that though. He saw a super cool big kid who knew how to have fun, and run, and explore. And so they did. Dashing throughout the empty theater and into the hallway together laughing hysterically like old friends.

Later that night after our newly 3 year old was settled into bed on the tail end of a sugar, presents, all day fun crash, I reflected on this interaction a bit more. Maybe Jack seeing the absolute best in that little boy at the theater meant even more than I realized in the moment. Maybe the kindness Jack showed by seeing the ability and curiosity instead of the difference boosted that little boy’s confidence or raised his mother’s spirits. In fact I know it did, I saw it in their smiles.

And to that sweet little boy. Thank you for showing your Paddington kindness to Jack. You saw the best in him too – a boy 3 years your junior who wanted to copy your every move was not a pest you wanted to shake off, but a new friend. You gave him the birthday gift of pure, unfiltered joy. The world needs more people just like both of you. 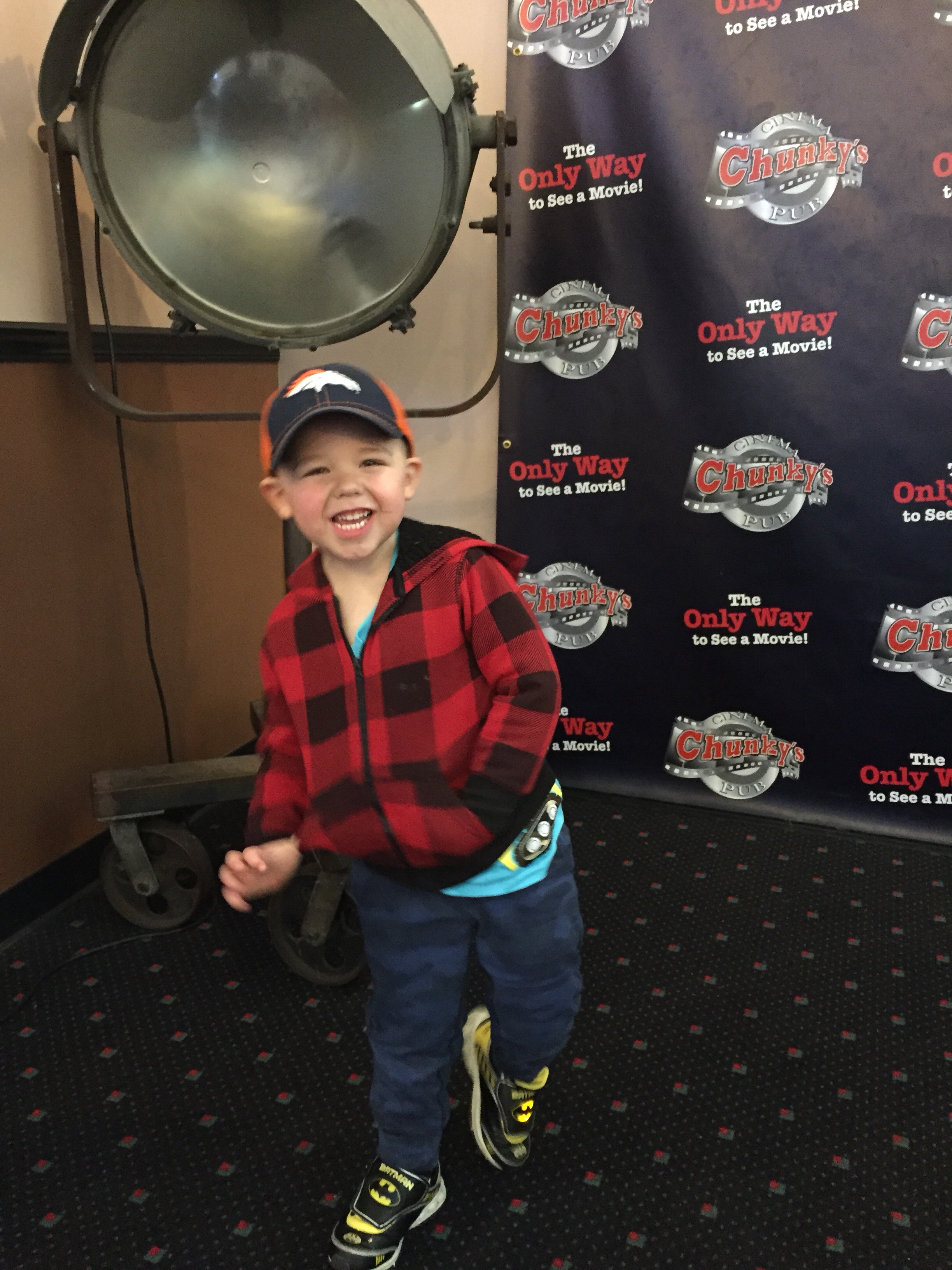 All in all, I think I’ve prove my point. That’s award winning stuff right there.

With way too many emotions; I’m bearly holding it together,