You don’t need to have read Work Trip Part I before reading Part II. If you’ve been following along you know darn well that my writing has no logical rhyme or reason. But if you did read Part I you’re the best and I love you. And if you didn’t, I get it. You’re busy. It was basically all about pretzels.

The way home from Philly involved far fewer pretzels than I wanted. And far more hours in the airport than I needed. Approximately 5 more hours than I needed. While I disassociate myself from my millennial generation at every possible opportunity, I embraced one of our more endearing qualities as I waited for Jet Blue to stop being the worst and took to social media to express my frustrations.

At this point the flight wasn’t even officially delayed. Just maybe delayed, and then maybe not delayed. Every 45 seconds. I’ve never wanted to hurl my phone so badly in my life. Not even when Clay Aiken didn’t win American Idol after I spent the better part of an evening trying to vote.

Once the flight was officially for real delayed, I learned something new about myself that is sort of nice but also sort of exhausting. I have Resting Helpful Face. No matter how engrossed in my work I was, or how Mommy sad I was for missing another night of bedtime for the little humans I somehow continued to look friendly. At least 7 people came up to me to ask what was going on with our flight. 7. Then once we learned we would be at the Philly airport until the end of time, 2 more people decided I was their therapist. I really don’t know what to tell you “Man who thinks it is outrageous that Jet Blue changed his seat and also is trying to eat healthier lately,” I just want to go home. Stupid Resting Helpful Face… 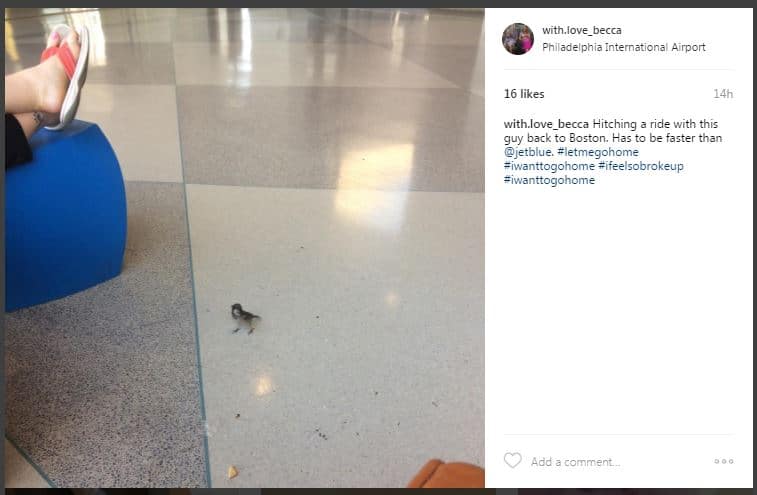 Also there were birds in the airport. Way more birds than you expect to be inside the airport. Usually I expect zero birds. This one was kind of nice though, and was building a nest in Terminal E. I wish him the best.

Why Don’t You Let Me Go Home

Jet Blue had been taking the brunt of my social media onslaught up to this point so I thought I should spread it around. This one was less of a personal attack on Philadelphia and more hanger. But by hour 4 I turned on Philly completely. 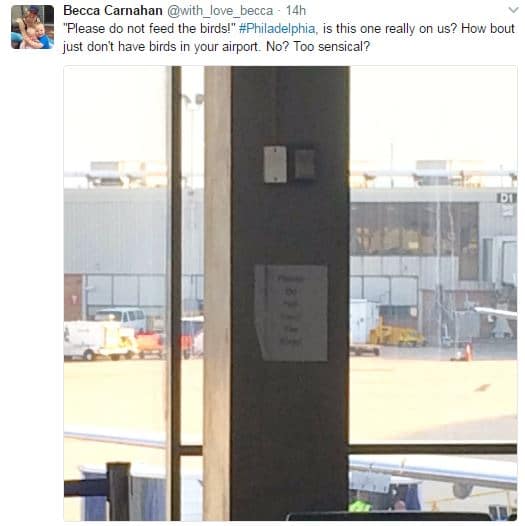 This is the worst picture of the worst sign I’ve ever seen. Beyond the fact that Philadelphia International Airport needs more toner, I’m so confused by their directive. If you don’t want us to feed the birds then you really shouldn’t have birds here. Are you feeding the birds? I sort of doubt it because I have been here for half of my adult life and no one even offered me a pretzel. The bird is super friendly and if you are going to take in birds and then not feed them he’s getting a cracker from my bag. #sorrynotsorry

I Feel So Broke Up

We finally boarded after there weren’t “too many planes in the sky for our plane to land.” Then after missing the remaining overhead bin space by 2 people (another loss for Resting Helpful Face, apparently this also makes it seem like I don’t care if people go ahead of me in lines) and waiting 90 minutes on the tarmac while the pilot continually directed us to marvel at the huge line of planes in front of us like it was the Grand Canyon, we finally got into the air to find…

Lightening, the whole trip. So between pretending to watch Friends episodes I finally memorized the Hail Mary and asked the flight attendant if he could get me a water and a rosary.

We didn’t die, which was cool. And I got home eventually after a broken baggage carousel, a shuttle back to western Connecticut where my car was parked, a series of very punchy texts to my mother, and a drive through the the kind of thunderstorm that makes you glad you finally learned the Hail Mary an hour ago.

But overall it was a pretty good trip.

With a head filled with anxiety and a heart full of grace,