Let Me Tell You ‘Bout My Best Friend

I recently spent the weekend with my best friend in Pennsylvania. And if you haven’t spent a weekend hanging out with Kel you really should. It’s good for your soul. Or I guess spend a weekend with your own best friend, but I’m just saying that if there was a Yelp for people Kel would get 5 stars.

Speaking of Yelp, to further drive home how great Kel is I’ll share an excerpt from our email exchange. Knowing that driving isn’t exactly my forte, Kel provided me with driving directions. And not “take 495 to 95” type of directions, useful ones.

If you plan on taking the GW bridge, there are good rest stops all along route 15 in CT. (Our GPS usually directs us that way.) They’re the kind you don’t have to get off the highway for. You can also charge your Tesla at all of them because, Connecticut.

The rest stop right after the GW is the “Vince Lombardi” rest stop, and you might think “that sounds fun” but it is in fact not. You wind around and around and around on the off ramp, seemingly through a tractor trailer graveyard/nuclear fall out zone, only to get to a massive, filthy parking lot. (One star, would not drive to again)

If Kel had a blog this is where I would link to it 400 times. Kel, you should have a blog.

During this visit I went to a bowling fundraiser with all of her co-workers, which I didn’t find strange because years ago I spent a full day playing bocce with her entire extended family. And things got real.

Kel has a large extended Italian family. I have a large extended family that thinks they are Italian. So when she invited me along to her family’s bocce tournament I was very game. I’ve been playing bocce since I could walk. My first word was “pollina.” Which, because my family is Irish, I didn’t realize until right now is actually supposed to be “pollino.”

But in any case, bocce wouldn’t be a problem.

What my pretend Italian family did not prepare me for was how seriously Kel’s real Italian family would take this tournament. Our Irish bocce was played on the beach with koozies. But this tournament was the intense kind of fun and, as it turned out, also “family only.” Kel’s boyfriend at the time, Brian, and I could watch, but our blood lines did not allow us onto the court. But we threw a couple games while the family was getting set up, which is when I got scouted.

Call in the Righty

Kel’s grandfather’s cousin saw my bocce prowess and literally said the words “Hey you, you’re good. You’ll play on my team.” Brian was not so lucky which actually worked out well for me and Kel because he could hold our drinks and get us snacks. (Brian, this is why you gave me and Kel too much wine at the 5 year college reunion isn’t it? Still bitter. It’s all coming together now…) 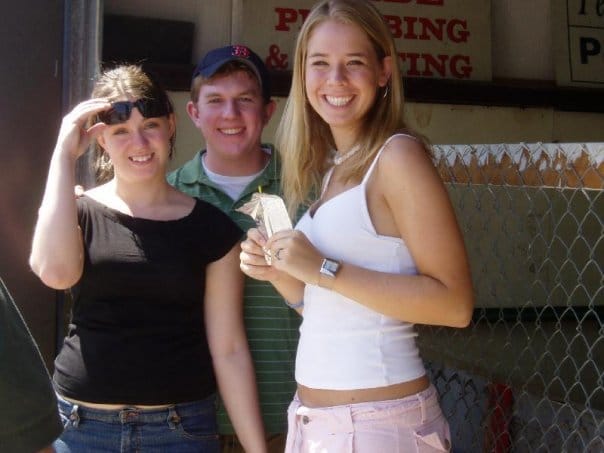 Why was I wearing a belly shirt? And a see through watch? Is that a Capri Sun?

We then entered into the longest bocce tournament of all time. It ended up being double elimination style and since Kel and I are incredible at bocce, and Kel’s grandfather’s cousin was even better, we were there forever. FOR…EV…ER. We were there so long the country changed Presidents, twice. We were there so long that New Kids On The Block were cool and then not cool and then cool again. Finally fatigue set in and we had to fake injuries so we could get back to college before our graduation date came and went.

I have it on good authority that tournament is still actually going on.

So, at the end of the day I prefer koozie beach pretend Italian bocce. But this particular tournament will always hold a special place in my heart. It really was a good day. Cheers to you, Kel, my best friend who makes everything more fun.

With undiagnosed bocce wrist that will haunt me the rest of my days,