Apparently my three year old didn’t think I was cool enough to be spending a weekend in New York. Newark? Maybe. But certainly not New York.

He wasn’t entirely wrong. But gosh darn-it, I really tried to pull it off.

If You Can Make It There, You’ll Make It Anywhere

#bff Kel and I had made plans for this trip many many moons ago when she scored tickets to Hamilton. She’s basically magic because these are the hardest tickets to get to anything ever. Like the Super Bowl of Broadway productions. The World Championships of Musicals. The Olympic Ladies Free Skate of Dance and Song. 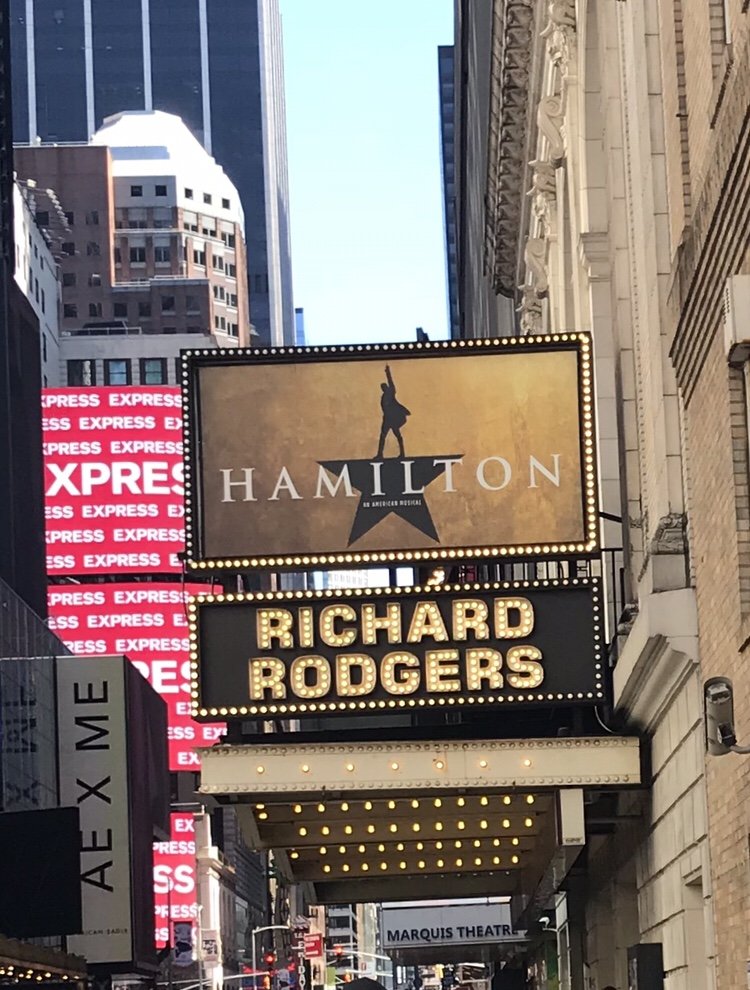 This actually was all we had planned for the trip until rather recently when we were all like, “shoot, we should make plans for New York.” And then Kel took care of everything, because Kel. I essentially just showed up via bus with a “I’ll be a better friend and travel mate in the future” voucher.

I thought about driving to NYC, but switched up that plan last minute because I reintroduced myself to myself. Upon said introduction, I learned that I do not like driving and I especially do not like driving in cities. So myself graciously booked myself a bus ticket. Which ended up being really good because I panicked three separate times while driving to the bus station, which is a half hour from my home. Cool.

My bus did its job well and dropped me off a block from our hotel. A fact I was unaware of until looking it up on my GPS, wandering around New York City for twenty minutes dodging numerous headless Elmo impersonators, realizing that my GPS was pranking me, and finally forcing myself to use logic and reason to count streets and avenues.

Our hotel – Pod Hotel: Times Square! Kel came across the Pod option while searching for good hotel deals and it was a downright genius find. The concept for the Pod Hotel is that really you’re going to be in the room for a grand total of 9 hours maybe, most of those hours in slumber, so you don’t need much space. And if you are grown adults who miss summer camp, then you might enjoy the nostalgia of bunk beds.

They were correct! We did enjoy the bunk beds. Comfortable, basically brand new, and each with its own phone charging station because #Millennials. There was even space in the 60 square foot room for a bathroom which was a huge win. The other Pod Hotel in NYC has shared hallway bathrooms. I stayed in a shared hallway bathroom hotel once in Wyoming and thought I was going to get murdered. I didn’t, but Kel agreed that booking the less murdery hotel seemed like a good investment of an extra $50.

Gazing out the hotel window onto Time Square and discussing getting pizza for lunch, I said to Kel:

“Wow. Look at us. In New York, staying in Times Square, going to get pizza, seeing a Broadway show. We’re the New Yorkiest!”

To which she aptly replied:

Fine. But we did get some very delicious pizza at the very generically named “John’s Pizzeria.” It used to be a church and is was converted into a restaurant. Maybe there is a biblical reference with the name John there? But I’m pretty sure it was just a guy named John who started a pizza shop and what he brought to the table in chewy dough he lacked in quirkiness.

5 stars though. Would visit again.

Not Going To Miss Our Shot

Then we went to see Hamilton and my whole world changed.

Yes, it was incredible and I’m forever changed. 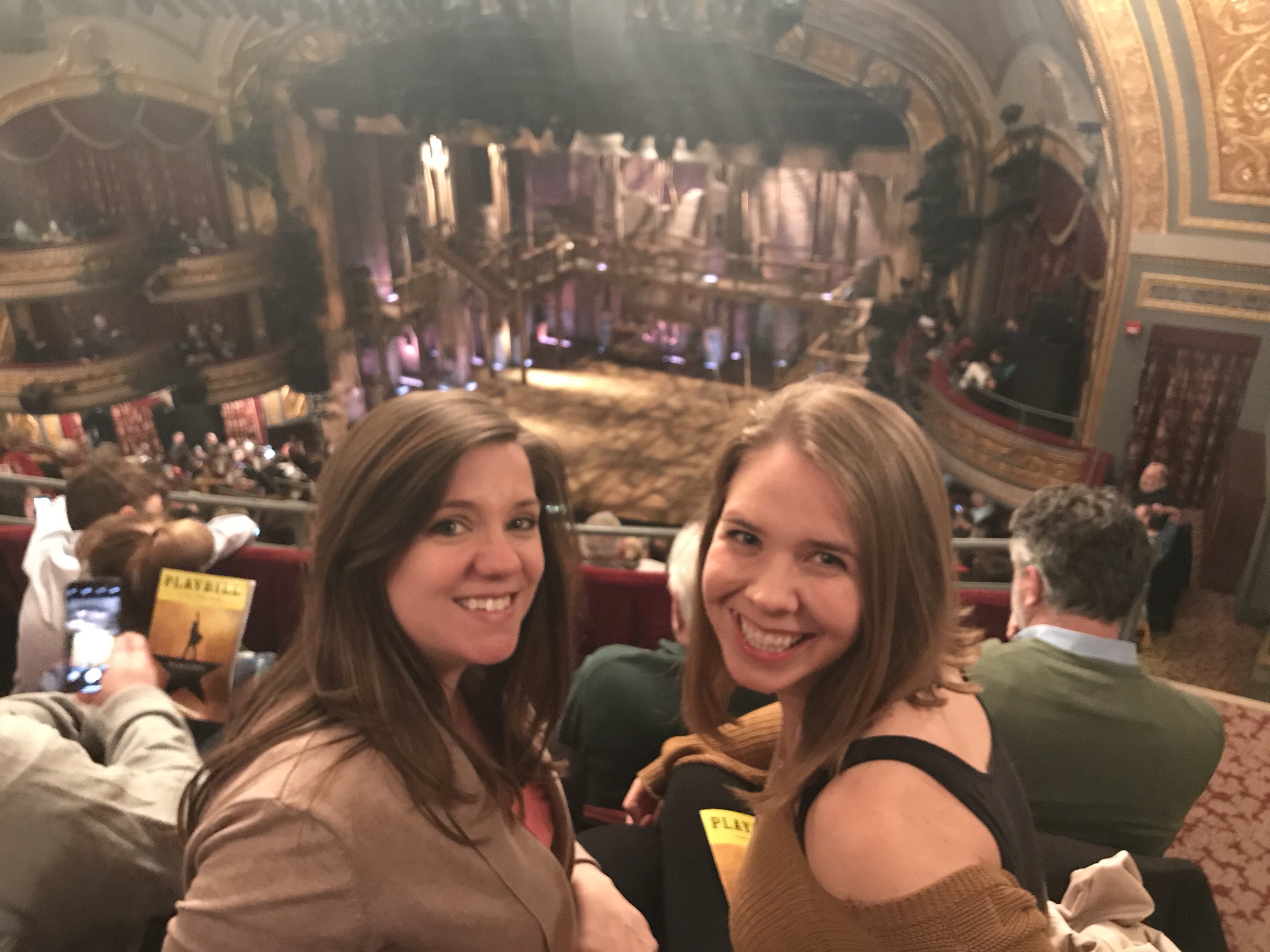 I was a little worried that it wasn’t going to live up to the hype. This show has been on Broadway for several years now and you have to name your first born Hamilton, or know Kel, to get within three blocks of the theater. Kel had already seen it once, has the songs memorized, and told me that she broke own crying at the end. Good gravy, what if I didn’t like it? Or worse, didn’t get it?

But about three minutes in I was totally transfixed. By four minutes in I was in love. This spectacularly acted show was definitely educational; the bio I could give of Alexander Hamilton before this show was “founding father, Aaron Burr killed him, the end. At the same time it was also tense, funny (the King… stop it…) catchy, and weeping quietly in my seat level emotional. Seriously, there is some parent/child/love/loss stuff in here that my heart simply could not handle.

Sung and rapped the whole way through, there are no scenes with straight spoken words. And it didn’t need them, at all. The entire complicated story line could be conveyed musically, and as a result my country music soul developed a new appreciation for the intricacies of rap music. I realize how much of a nerd that makes me sound like and that’s fine, I’ll own it. Personal growth!

This isn’t even to mention how groundbreaking this show is in terms of race and representation. Others can speak to that more eloquently than I, and therefore I gladly cede the floor to David Horsey.

In a New York Minute

I understand this was a very “Dear Diary” style post. Thanks for coming along for the ride. And speaking of rides, stay tuned  for what I hope to turn into a funny story about return trip bus rides that at this very moment is a story of despair.

With a Fitbit that is pleased with my step count and more NYC stories coming your way,