You guys… we have visitors in our house. They are unwelcome, UNadorable, and they don’t clean up after themselves or make the beds. OH SWEET LORD, I hope they haven’t been in our beds…

The mice are back. Back again. And I’m not happy about it.

When You Give a Mouse an Inch

It’s probably gross to talk about your house having mice. But it’s our reality.  And my Instagram has been filled with too many pictures of kids being clean and cute lately. So this is called balance.

I honestly don’t think the mice issue is because we’re filthy. I mean we aren’t clean, but we do sweep our floors and pick up leftover food. Yet still we are left with little critters making their way into our home with reckless abandon.

Glen has been all around the house spray foaming over any potential entry point and somehow they are finding a way. Points for persistence and ingenuity. Negative points for breaking and entering. Usually Glen is also in charge of checking the mouse traps we have scattered around the house. I don’t care if that is bowing to the patriarchy, I will fight for equality in other non rodent related ways.

Lately, Glen’s rage against the mice has reached a fever pitch. He has purchased three different kinds of mouse traps and one night placed them every five feet in our kitchen. It was like a real life game of Mouse Trap but not nearly as fun.

As we sat in the living room the first night of a million mouse traps we heard a snap. GROSS, we got one…

Ten minutes later we heard a scurry and a slam. A slam?? Do we have deer in our kitchen? Angry, angry deer? Turns out another mouse had managed to drag a trap with him underneath the oven. I sat on the couch feeling mildly guilty while Glen handled that situation. But not THAT guilty. I did birth his children, and Jack was huge.

The next day while I was working from home I thought that a squirrel was attacking our gutters. It’s happened before, so I wouldn’t have been shocked. Our squirrels aren’t the brightest crayons in the box. But when Glen came home he astutely realized that the call was coming from inside the house. A mouse was trying to break free out of our oven drawer… WORST… Again, I moonwalked out of that room and I moonwalked fast.

Of Mice and (Wo)Men

While Glen has born the brunt of the mouse problem,  I’ve had to suck it up and deal with the mice twice now. I think that basically makes me the bravest person alive. According to my mother it DEFINITELY does.

With the live guy I opened up our trash compactor to put in a new trash bag and saw movement where there should NOT have been movement. Baby Ratatouille stared right up at me and I slammed the trash compactor shut. Looking at the clock I realized that I still had four hours before Glen was going to be back home from work. I couldn’t leave the mouse in our empty trash compactor for four hours… I mean I could… but I like being married.

After I got my nerve back I grabbed a plastic place mat to slide under the Tupperware mouse. Screaming silently the entire time, I managed to get the place mat under the mouse and sprinted through the doors into the woods. Chucking the place mat Tupperware mouse as far as I could I then sprinted back into the house. And locked the door behind me. Apparently neither Glen or I have any idea how rodents work.

My second mouse extraction experience was with a mouse that was mostly dead. Or playing dead. Ugh, I don’t even know. This story is so disgusting.

Glen was away for business so I holding down the fort with the kids. Honestly if I had remembered that we had one of those sticky mouse traps on the floor I would have thrown it away and blamed one of the kids when Glen got back. But I forgot.

So after bedtime I came downstairs ready to pour a celebratory “got both kids to bed” glass of vino only to find a mousekatool hanging out on a sticky trap. I walked back into the other room hoping I was just dehydrated and hallucinating. I was not.

Using my same tried and true Tupperware strategy plus the addition of two garbage bags for opaqueness, I got this guy out of the house. It took me 45 minutes though because I had to take some breaks for dry heaving and self pity.

We All Have Our Mice

The point of this post? Life isn’t always pretty. Sometimes life is full of mice in your house.

As we head into the holiday season we are going to see a lot of pretty Instagram posts about trimming the tree and being #blessed. I won’t even pretend that some of those posts won’t be from me. Pictures are fun, I’m #blessed too. But if you are feeling like everything is a little less than perfect right now in your life or career, please remember that my house is under attack by mice…

We all have our respective mice, even if we are not posting about them online. Don’t worry, friend. You’re doing just fine. 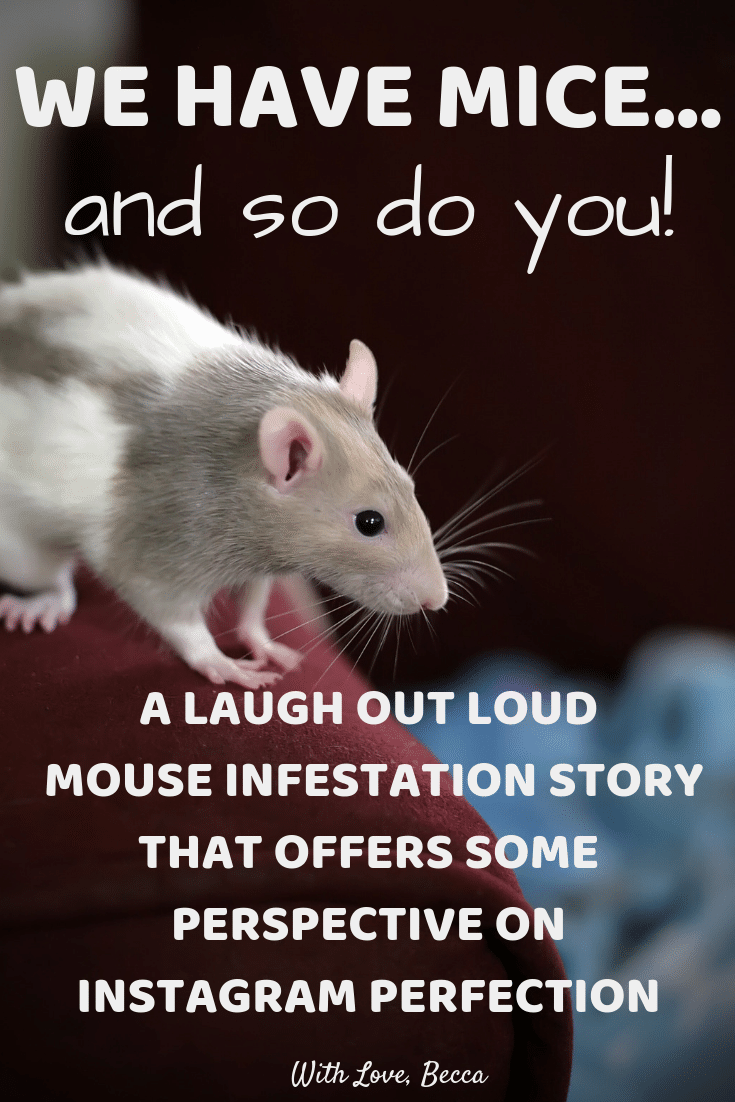